One of world's most secure USB encryption devices, this portable USB data stick offers impressive speeds so that you, and only you, can access your sensitive data in a flash.  With advanced features such as crypto perimeter protection and brute force hack defence, this impressive portable encrypted memory stick is the only smart choice for data protection on the move. 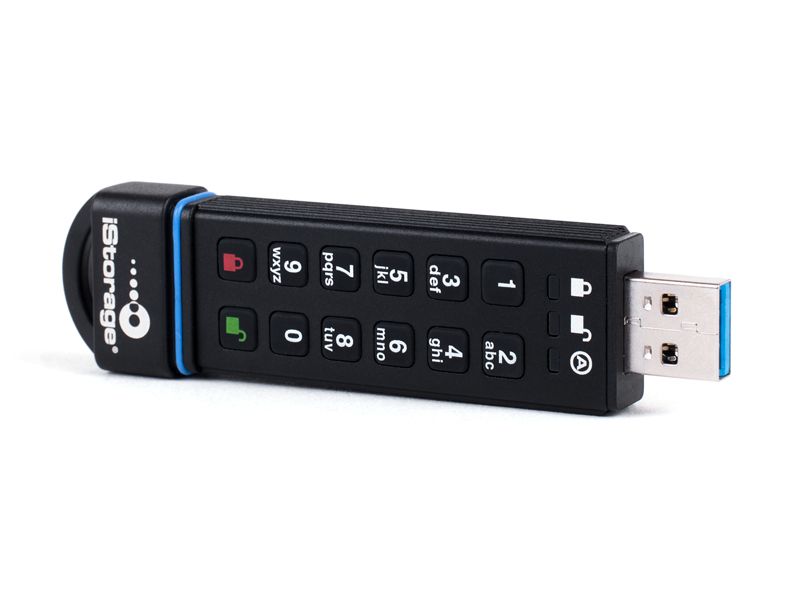 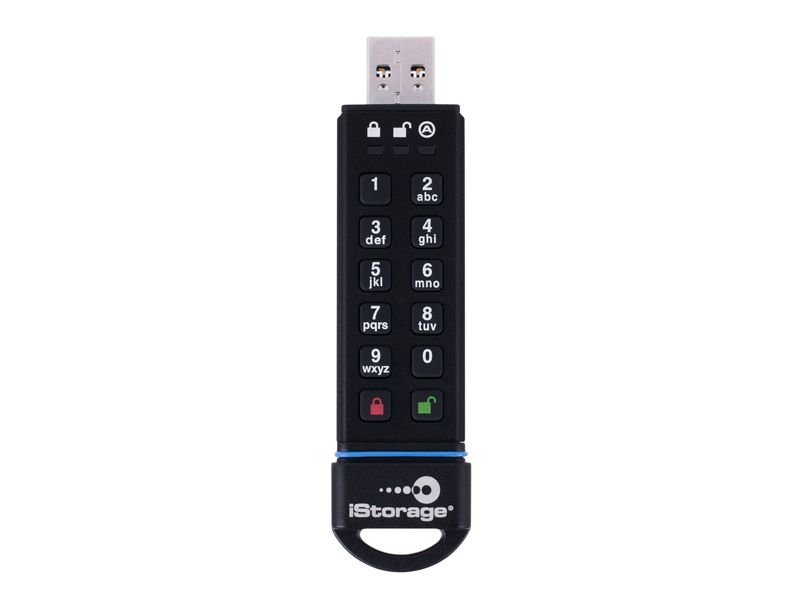 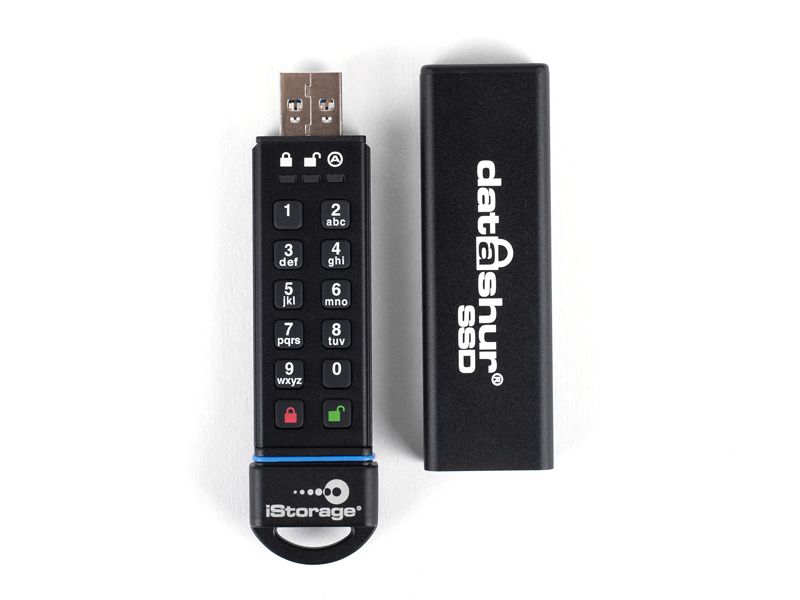 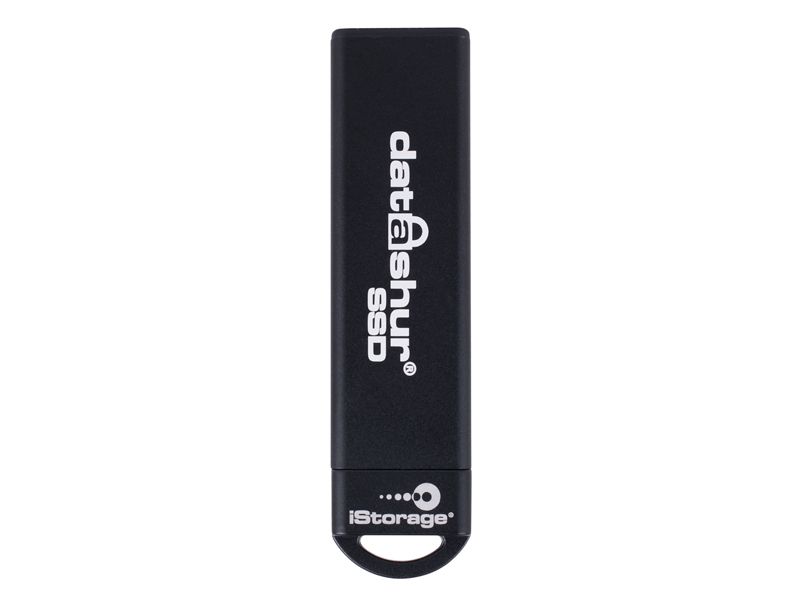 One of the most secure, fastest solid state portable USB devices on the planet!  With software free operation, cross platform compatibility, USB 3.0 speed, increased capacities, plus a host of high level security features that you’d never expect to find in a flash drive - the DatAshur SSD brings an array of advanced data security to your fingertips.

This easy-to-use USB flash drive incorporates PIN access with military grade 256-bit AES hardware encryption that will last for years and perfectly fits inside a robust, waterproof and tamper evident aluminium casing which protects against physical damage whilst the internal drive components are sealed with a tamper proof coating.

Administrator mode allows the setup of a ‘Read Only’ user mode so that data can only be read from DatAshur SSD, protecting the data from accidental deletion and changes to the file’s content.

Use DatAshur SSD as a bootable USB flash drive without the need for any configuration.  DatAshur SSD devices are equipped with a 10 second uninterrupted boot delay in order to accommodate power cycling during a host boot process.

The DatAshur SSD has been certified as FIPS 140-2 Level 3 having undergone the process of validation to meet the U.S. government standards for information technology and computer security.  NIST FIPS 140 is the cryptography standard program required by the US federal government for protection of sensitive data. The DatAshur SSD’s FIPS 140-2 validation covers 11 areas of its cryptographic security system, including physical security, cryptographic key management and design integrity.

Available in four (4) levels, the datAshur SSD’s FIPS 140-2 Level 3 certification encompasses both the DatAshur SSD’s physically secure features as well as its identity based authentication.

All data on the DatAshur SSD is encrypted 'on-the-fly' with the in-built XTS-AES 256-bit hardware encryption.

Using an internal fully rechargeable battery, the DatAshur SSD enables the user to unlock the drive with a 7-16 digit PIN BEFORE connecting to the USB port on your computer, tablet or mobile device.  The embedded keypad prevents hardware and software key logging attempts to capture your password entered via the host system.

With no admin rights to contend with, the DatAshur SSD is a breeze to implement.

The DatAshur SSD can be configured with independent User and Admin PINs, making it ideal for corporate and government deployment.  If the user forgets their PIN, the drive can be unlocked using the admin PIN which can then clear the forgotten user PIN and allow for the user to set a new PIN.

The DatAshur SSD also includes a drive reset feature which clears both user and admin PINs, destroys the data, creates a new randomly generated encryption key and allows the drive to be reused.  The DatAshur SSD is capable of generating an infinite number of randomly generated encryption keys, allowing the user to reset the drive as often as required.

The DatAshur SSD's resilient design makes it perfect for travel and field applications.  With its rugged, extruded aluminium crush resistant casing, the datAshur SSD is tamper evident and protected against physical damage. The Ingress Protection (IP) rating is an international standard that tests electrical products against two main environmental factors, liquids and dust.

The testing is done independently by a 3rd party and involves two separate tests. In order to receive the certification, the datAshur SSD was subjected to a dust chamber for eight (8) hours and submerged in a water tank at one (1) meter for 30 minutes, after which the DatAshur SSD was tested for functionality and inspected for water and dust in its electronics.

The internal drive components are completely protected by a super tough epoxy compound making it virtually impossible to remove without causing permanent damage to the electronics.  This barrier prevents a potential hacker from accessing the encryption circuitry and launching a variety of potential attacks.

As the DatAshur SSD is unlocked using its own keypad and not via a keyboard, it is not vulnerable to software / hardware based key loggers or brute force attacks.  In addition, the datAshur SSD further protects your data with a programmable 'Brute Force Hack Defence Mechanism' which deletes the encryption key and destroys all stored data if the incorrect PIN is entered up to a total of 20 consecutive times.

The DatAshur SSD automatically locks once you unplug the drive from your computer's USB port or power to the USB port is turned off or after a pre-programmed period of inactivity.

Designed with protection in mind, the entire dataShur family incorporates ‘wear resistant keypads’ to hide key usage and avoid tipping off a potential hacker to the commonly used keys.

Designated for specific cases in which the DatAshur SSD needs to remain unlocked through USB port re-enumeration such as during reboot, or passing through a virtual machine.  With the toughness and security you'd expect, the DatAshur SSD brings new features, speed, and storage capacities that you'd never expect in a flash drive.