The Truman Effect: Unveiling The Truth Of Surveillance 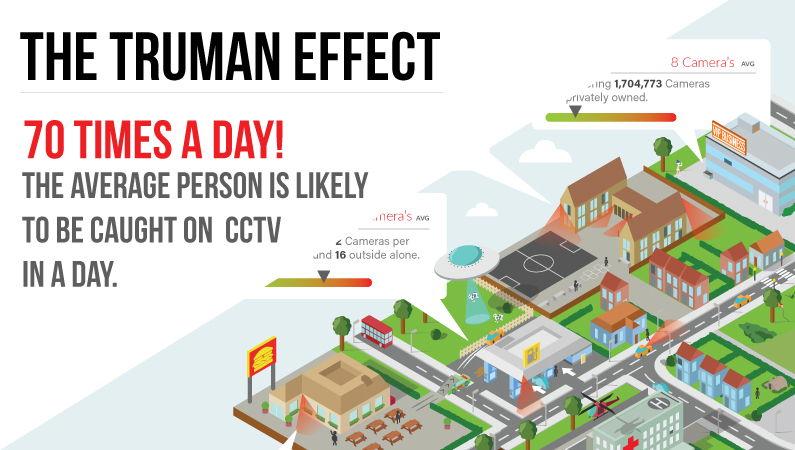 Whilst some find the presence of CCTV (Closed Circuit Television) disconcerting; others find its presence somewhat reassuring. Nevertheless, when brazen demagogues, dogmatic members of the public and budding journalists take the opportunity to scaremonger; many are left unsure as to whether it is indeed healthy to maintain some level of scepticism about having their movements tracked. With many feeling that their lives are being monitored on a daily basis; some have begun to draw the comparison between 21st Century Britain with the totalitarian dictatorship that was prophesied by George Orwell in his novel, 1984.

It would be easy to hastily dispel this comparison as the rambling of a suspicious scholar. However, considering the following statistics; this notion may have a little more substance than originally first contemplated. In a bid to uncover the truth about modern-day surveillance, we took a typical town or city that contained the basic amenities one would expect; from a school to a bank to public transport. Our data-focused on exposing the average number of cameras found, whilst using a heat bar to identify the number and the intensity of cameras placed in a single location. Our research exposed schools, banks, hospitals and the public transport system to contain the largest number of cameras!

So just how many cameras do we pass daily?

The average person is likely to be caught on CCTV 70 times a day. To put that into perspective, the UK has around 5.9 million CCTV cameras including 750,000 in schools, hospitals and care homes. So let's consider the Truman Effect: Unveiling the truth of surveillance. 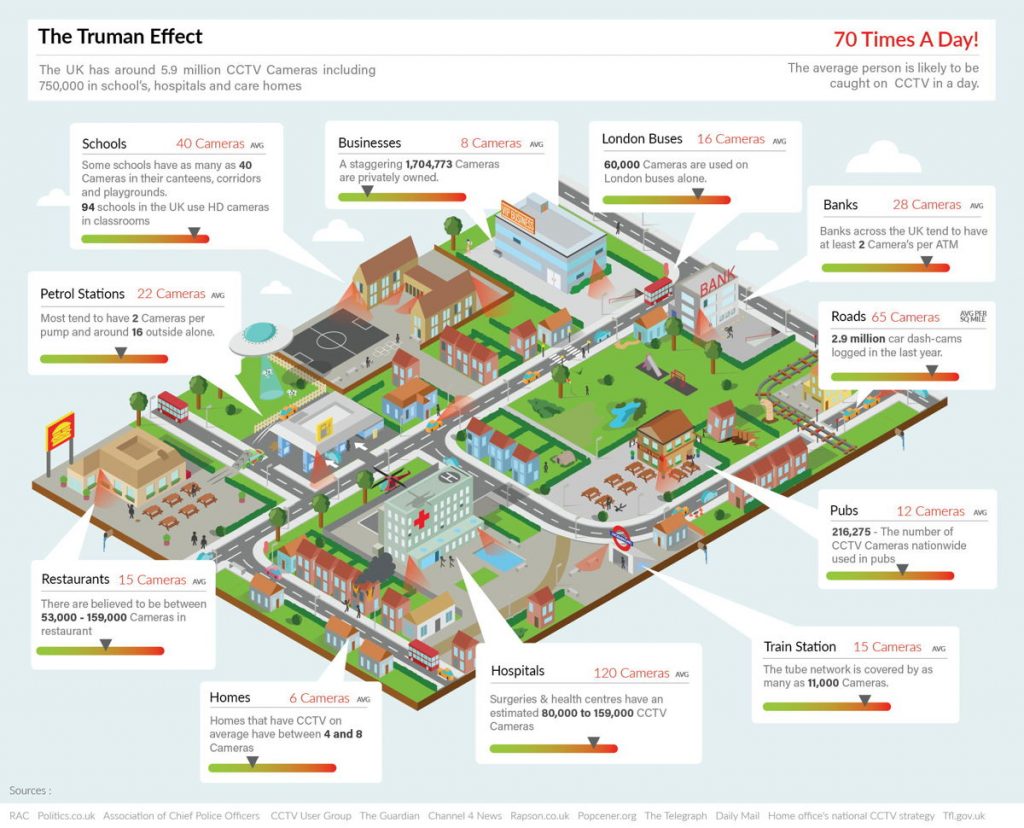 Only a few days ago, the dark truth of surveillance was unveiled, as Richard Branson released official CCTV footage of politician Jeremy Corbyn, in order to disprove his claims that he had nowhere to sit on a ‘ram-packed’ train. The legalities of this surveillance are now being scrutinised as a possible breach of data protection rules. All organisations and companies have an obligation to ‘comply with the Data Protection Act and must have legitimate grounds for processing the personal data they hold.’

This recent event only goes to prove the unprecedented power organisations hold over public surveillance, and how far they are willing to go when exposing an event that needs evidence to support. However, considering that the U.K accounts for approximately 4.2% of the CCTV cameras used globally and that there is roughly ‘1 CCTV camera for every 11 people’ (Telegraph) in the UK; this notion may have a little more substance than originally first contemplated. 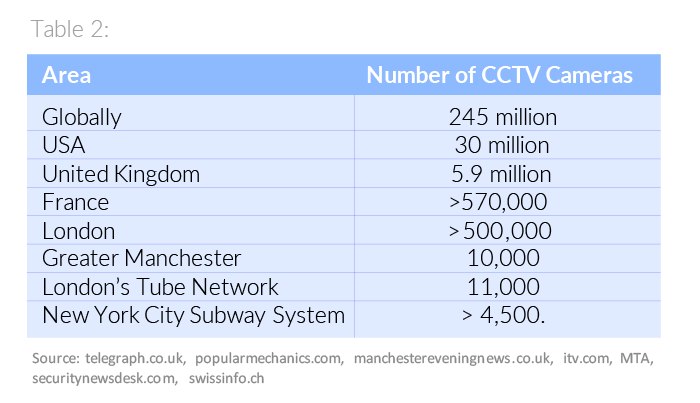 The past decade has seen societal paranoia grow substantially. It may therefore come as no surprise to discover that these findings largely correlate with the growth and advancement of technology. Perhaps deriving from the utilisation of algorithms and data-memorising technology, many consumers have grown to distrust larger companies and institutions. Typically, customers complained that they were previously unaware of such features and that the knowledge companies pertain in relation to their preferences, location and shopping habits, felt like an infringement of their privacy.

In a recent study; Bebbington examined how social paranoia has affected the British population, categorising those surveyed via their levels of social trust, anxiety and mistrust. The results of his finding are tabled below: 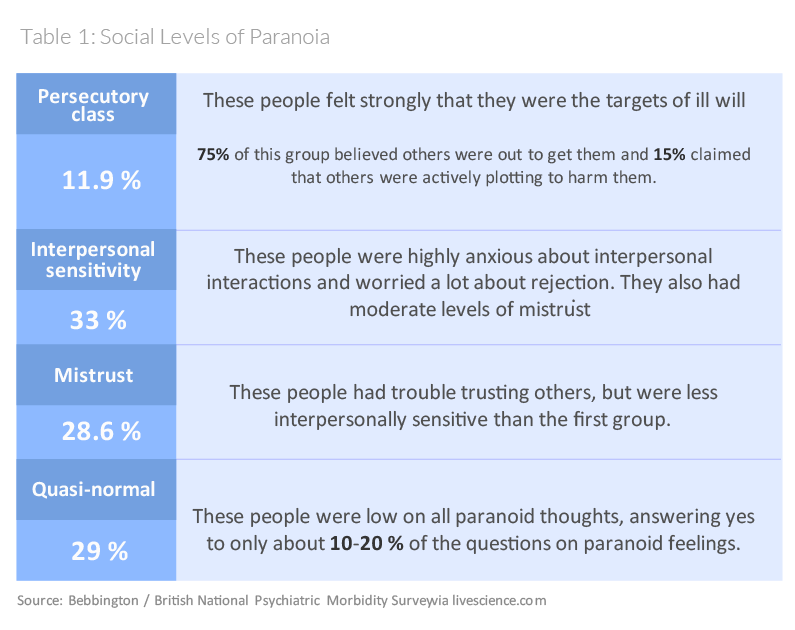 Prevention or displacement of crime?

Although there is a popular argument suggesting that CCTV merely displaces crime, rather than deterring it; the argument against their presence is somewhat flawed. The fact that crime is indeed being displaced illustrates their effective nature as a deterrent. If there were more cameras, one could argue there would be less criminal activity. Complete removal of CCTV would most likely proffer a sharp spike in crime, as statistically, most criminals are opportunists, and a lack of surveillance would indeed making their task easier. The majority of burglaries happen at a property that has a secluded space away from the prying eyes of the public, who could report their illegal activity.

Cameras that are in plain view, in schools, offices and outside of other such establishments saw the crime, in the respective areas, decrease significantly. Devices that were obscured, or not obvious to the public were still able to provide reliable evidence that could be used in court after a crime had taken place. Intelligent technology CCTV technology is becoming increasingly more intelligent and versatile.

According to prime-digital.com, schools have installed cameras that have ‘facial recognition technology, used to identify and track those who truant.’ Similarly, ‘ANPR Systems are used to monitor unauthorised vehicles. And, IP Cameras, as well as Access Control, identifies perpetrators who may intend to harm children or staff.’ The intention of close-circuit television is namely to act as a deterrent, guarding against criminal activity, as well as providing reliable and impartial evidence to be used in court, if needed. It is therefore somewhat fair to assume that CCTV fulfils the purpose it was intended for and serves no malicious intent. 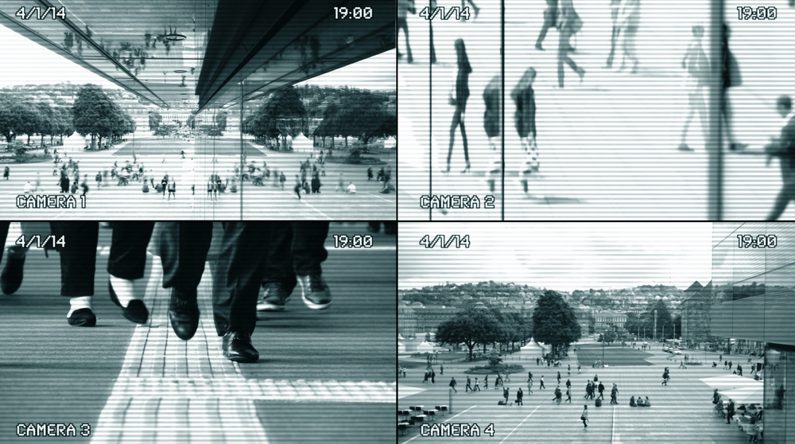 So why do we need this level of surveillance?

CCTV surveillance serves multiple functions, with its primary target being a means to fight crime. Through its presence alone, the public can enjoy greater safety. Some forms of crime typically take place in crowded public areas, such as the abduction of a child at a shopping centre. Video surveillance can aid in tracking the movements of such criminals and can alert the relevant authorities to step in and intervene on the public’s behalf.

In the case of a terror attack, an emergency or another form of a disruptive incident, surveillance cameras can be used tactically by the emergency services in order to secure the area and effectively respond to the situation. In the case of the private sector, which are responsible for the largest proportion of CCTV cameras across the UK; it is fair to assume that typically, business owners have no intention of prying on ‘Joe Average’. Managers are far too busy to sit for hours, reeling through footage of you working. The cameras are simply installed as a preemptive measure should the company suffer a robbery or other unfortunate event.

Britain can therefore rest easy; our faces may crop up on camera every so often, but if we go about our daily routines in an ordinary fashion; there is no need to attempt to evade the cameras – after all, that would be rather suspicious! 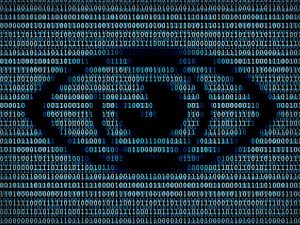