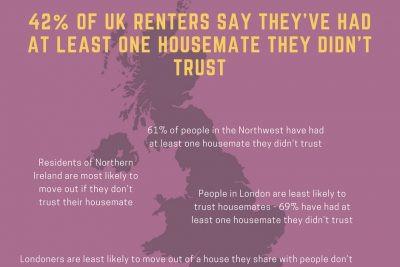 19% of renters don’t trust their housemates, according to a national poll conducted on behalf of surveillance specialists Online Spy Shop. Furthermore, 42% of renters have lived with at least one person they didn't trust and 13% (126 out of 1,000) have conducted surveillance on their housemates. The study revealed alarmingly low levels of trust among housemates across the UK. Large cities with competitive rental markets fared the worst for distrust among housemates, suggesting those who have less choice about who they share a home with are more likely to end up living with people they don’t trust.

Why don't we trust our housemates? 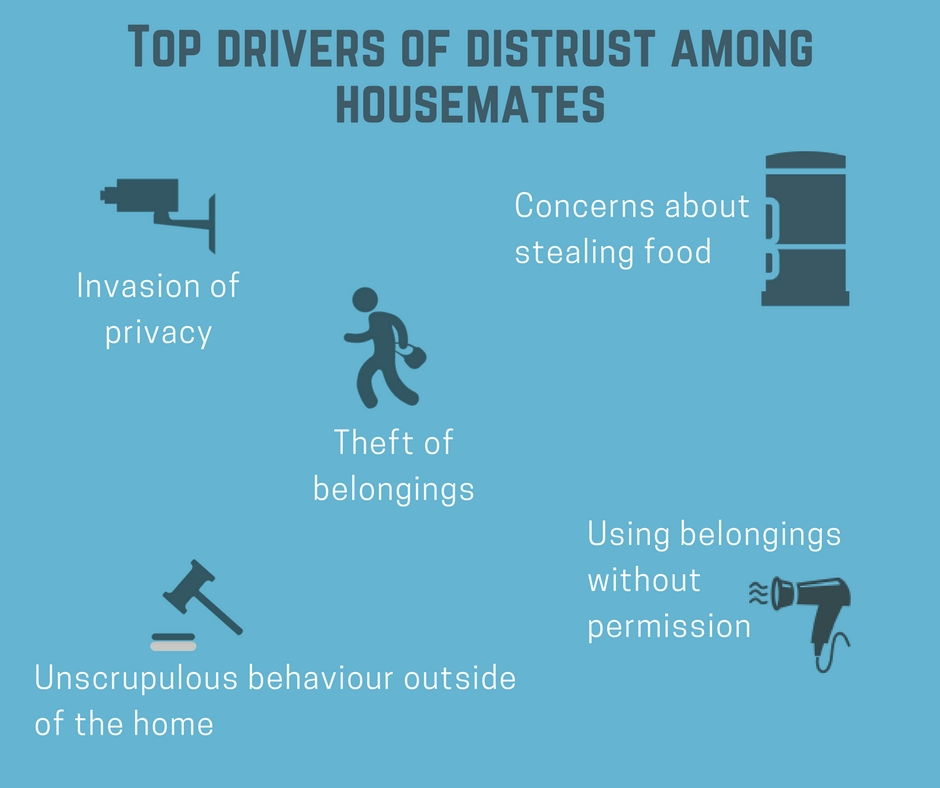 The most common reasons given for not trusting a housemate were (respondents could select multiple answers): Invasions of privacy - 79% Concerns about stealing food - 70% Using belongings without permission - 67% Unscrupulous behaviour outside of the home - 49% Suspected theft of belongings - 33%

Hiding belongings - including food or money - was the most common way UK renters said they deal with housemate trust issues. 63% of those who’ve lived with someone they don’t trust admitted doing this. One respondent said they took to purchasing a mini fridge for their bedroom in order to keep checks on their food and alcohol.   Other ways of dealing with untrusted housemates:   47% say they purchased a lock for their bedroom 22% conducted improvised surveillance, for example by taking photographs of where they left their belongings to see if they’d moved. One respondent said they put flour on their carpet to see whether their door had been opened while they were out   8% have conducted digital surveillance, for example by setting up a webcam or spy camera in their room or around the home.   55% say they eventually moved out 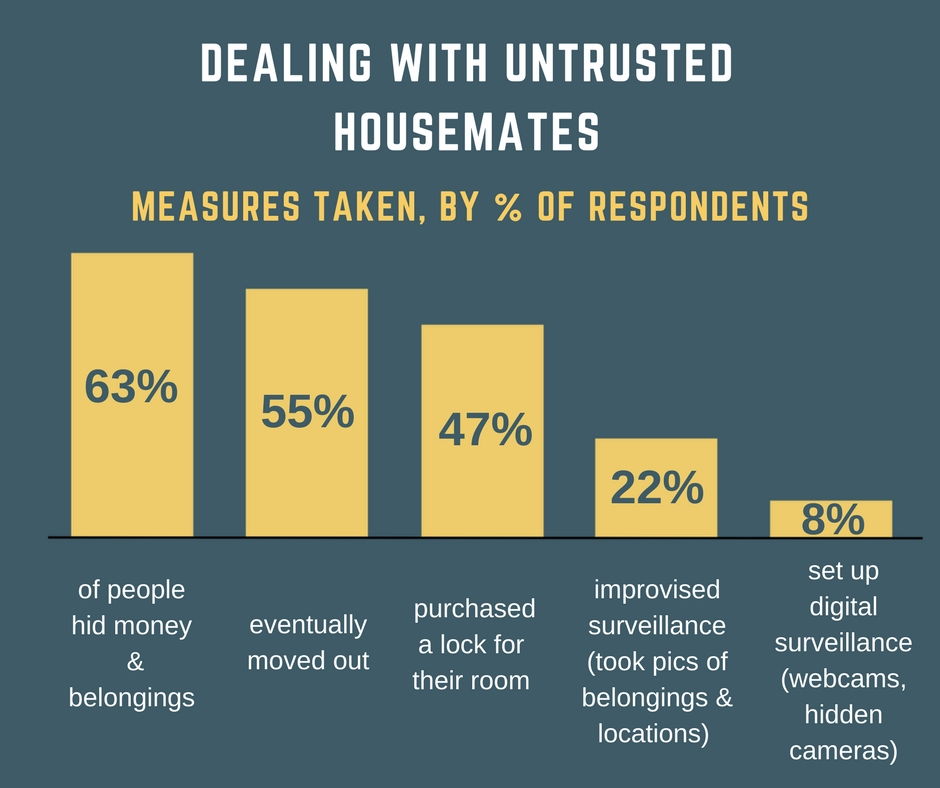 The issues that result in people sharing homes with people they don’t trust appear to magnify in London. High competition for homes and the higher-than-average expense of moving out appears to be forcing London residents to endure unsuitable living arrangements for longer than the rest of the UK.   In fact, London residents are more likely than anyone else to share homes with people they don’t trust, but they are the least likely to move out of that home.   House-sharers in East Anglia are the least likely to have a housemate they don’t trust

Steve Roberts, the security consultant and founder of www.onlinespyshop.co.uk who commissioned the study, believes housemate distrust will increase as long as a choice for renters is limited. He said: “In cities where rent is high, it’s often necessary to share a house rather than rent a one-bed apartment. This means that inevitably, people will be living with people they don’t know.   “That automatically increases the level of distrust among housemates. It’s not that people move into a house expecting their housemates to be untrustworthy, it’s just a natural response to sharing a home with unknown people. Hopefully over time trust grows, but as our study shows, it’s not always the case.   “My advice for anyone sharing a home is to assume your housemates are trustworthy until proven otherwise but to take the sensible precautions you’d take in other shared spaces, such as hostels.   “Keep valuables out of sight.

This is sensible to protect against opportunistic burglars as well as shady housemates. Note down serial numbers of expensive items and don’t leave valuables lying about. “If you do have a reason not to trust your housemates or their friends, don’t make unfounded accusations as this can create stress and conflict. There are apps to turn your laptop or phone into an ad-hoc security camera for your room, or you could invest in a discreet camera to ensure people aren’t accessing your room without permission. If you get evidence of this happening, consider speaking to your landlord, the police or if it’s safe to do so, calmly confront your housemate. But don't set up surveillance in any area where your housemate has a reasonable expectation of privacy, such as common areas of the home.”