Cameras And Trackers For Cyclists

Nearly all UK towns and cities have keen and active cycling communities, but too often priority is given to the motorist. This can leave cyclists facing an obstacle course of dangers, hazards and inconveniences just to carry out their daily commute, never mind cycling for pleasure or fitness, or training for a cycling event.   Being so much more vulnerable than motorists, cyclists need to do all they can to protect themselves. Experience and knowledge, of course, go a long way, as does defensive riding.

However, not all cyclists realise that tech could help protect them on the roads and that just a couple of essential pieces of kit could deter dangerous drivers and keep both themselves and their bikes safe. 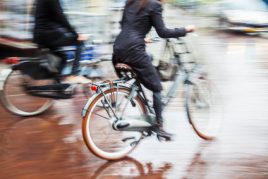 As all road cyclists will know, cycling on busy roads and highways alongside fast-moving vehicles can be a hair-raising and occasionally terrifying experience. Cyclists are at a distinct disadvantage and can often feel unsafe on the roads, fearing collisions and accidents as well as confrontations with impatient and angry drivers. A visible body-worn or helmet-mounted camera can help cyclists to feel safer on the road, as well as act as a visible deterrent to dangerous drivers. Although they should always take extra care when passing or manoeuvring around cyclists anyway, knowing that their driving is being recorded can prompt motorists to be safer and more responsible.

The presence of your camera is a strong deterrent against passing too close or other reckless acts that could endanger a cyclist. No one wants to be caught on film breaking the law, especially when the cyclist would be within their rights to pass the footage on to the police. There are many specially designed cameras for cyclists, ones which fit onto the helmet or onto the handlebars of the bike. However, some other types of surveillance cameras may also be useful, depending on how compact and suitable for use on the move they are.

Keeping your bike safe at home

As well as keeping drivers in line with body-worn cameras on the roads, it's also important to keep your bike safe when it's not in use. If you cant keep your bike behind closed doors, outdoor surveillance cameras can keep a close eye on it when it's locked up outside your property. You can check in on it using your smartphone whenever you like, or choose motion-activated cameras which send you an alert when motion is detected.

This kind of protection may seem excessive, but good quality bikes are far from cheap, and those with a collection of branded, vintage or specialist bikes and no space to store them indoors will definitely want to do all they can to keep their bikes safe.

Another key piece of kit you may want to invest in as a cyclist, as well as a surveillance camera of some kind, is a GPS tracking device. One of the biggest benefits of fitting a bicycle with a GPS tracker is that you can quickly and easily locate the bike if someone tries to steal it. True, GPS trackers can be removed with a lot of effort, but they can also be cleverly hidden or securely fixed to the bike.

Something like a mini car tracker (if you aren't buying a specialist bike tracking device) can be bolted to the underneath of the frame of the bike so that it looks quite subtle and discreet, and is also reasonably tough to remove. A thief may eventually manage to remove it, but not before you've received an alert on your smartphone and informed the police of your bikes current location. Many bike thieves are opportunists, and they usually go for an easy steal. If your bike looks like it has a tracker on it which they'll need both tools and time to remove, a potential thief may not consider it worth the risk and move on. 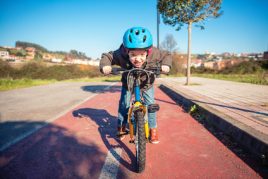 Knowing exactly where a bike is at any given time can also be good news for parents. The ability to check in to make sure your child hasn't strayed too far on a bike ride, or see that they're on the way home when the curfew is approaching, can be hugely reassuring. 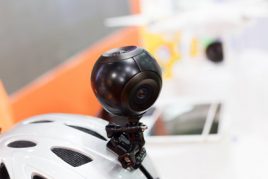 GPS trackers also have another useful application  improving cyclist performance. In fact, if youre serious about your cycling or fitness, or you are training for an event, GPS trackers can prove invaluable. GPS trackers can give you real-time information on routes you've taken, distance travelled and speed. You can keep up with this information on the move, or you can use it to analyse your performance post-ride. Over time, you can build up a picture of the distance travelled.

So, if youre trying to work your way up to an ambitious goal, ready for a race or a long-distance cycling event for example, then you can track your progress after each and every ride. Again, there are many specialist cyclist tracking devices you can use, but even a mini car GPS tracker can help you get a good idea of the distance you've travelled and your speed at each part of the journey. You can even generate reports across a week, month or longer, if you really want to go in-depth to analyse your performance or progress.

Being so compact, a GPS tracker can be bolted onto your bike frame without adding much unnecessary weight or bulk to slow you down or get in your way. You may even be able to use your GPS tracker on an everyday basis, for example, to cut down on the time it takes to cycle to work each morning by finding a more efficient, quicker route.