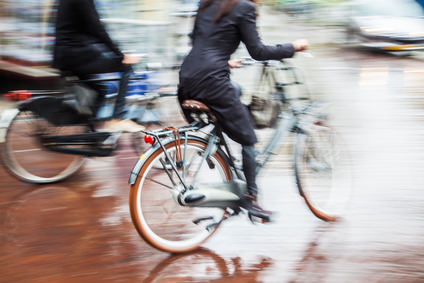 If you’re an avid cyclist, you’re likely to spend nearly as much effort and money on bike security measures, preventing your bike being stolen as you do on safety or performance equipment.

Unfortunately, bicycles are quite a bit easier to steal than cars. According to the Office for National Statistics (ONS), nearly 300,000 bikes were stolen in 2017 and this figure could even be higher as not everyone bothers to report bike thefts to the police.

More expensive bikes understandably tend to be targeted more often, but other, cheaper bikes are often stolen in order to be vandalised and ridden rather than sold. If the opportunity is there, a bike thief is likely to take it no matter how much the bike is worth.

How can you keep your bike safe? The following bike security measures aren’t guaranteed to keep your pride and joy, or your essential means of transport, out of the clutches of thieves or vandals. However, they are absolutely worth a try, especially if you have an expensive bike. 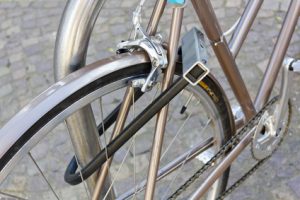 Gold rated locks, as rated by the independent organisation Sold Secure, are believed to be the hardest for thieves to break. Other less secure locks are graded down at Silver and Bronze. Gold-approved locks aren’t indestructible, but they can be tough enough to put thieves off and make them try elsewhere. The best advice to bear in mind is to buy the best approved lock that you can afford, relative of course to the cost of the bike.

Securing your bike and peace of mind are not the only reasons to buy a gold rated approved lock. The lock you choose can also affect any insurance policy you have for your bike. Although it depends on your policy, some insurers simply won’t pay out if you can’t prove you had a lock approved by Sold Secure.

According to guidance on cyclist.co.uk and other sources, there are a number of specific things you should be doing when locking up your bike. You don’t necessarily need to do all of them, but each additional step can add extra security to your bike and lower the chances of theft. These include:

3.Make use of CCTV and personal security cameras

When locking your bike up in public, it’s a smart choice to pick a spot that has obvious CCTV. This can be a deterrent to potential thieves, and it may also be able to provide you with video evidence of the crime and the perpetrator if your bike is stolen. CCTV is not a substitute for good locking practices though, and some thieves even target CCTV areas with their faces hidden because they feel it’s where people tend to let their guard down when it comes to locking their bike up properly.

When locking your bike up at home, it’s usually best to bring it inside. If you have no option but to lock it outside, for example in your back yard, make sure you invest in a good CCTV security camera. This should be installed above the yard on a wall of the house, pointing down at the bike and if possible, taking in any entry points such as back gates. Night vision and motion-activated recording are very handy features to have in this kind of surveillance camera, as night time is when your bike is most likely to be targeted by thieves. 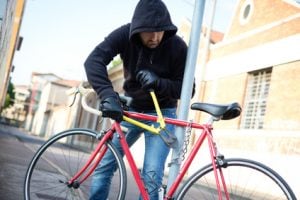 4.Use a GPS tracker

Just like you may use a helmet camera to improve safety on the roads, you can utilise another type of technology to keep your bike safe. Many cyclists are now using GPS trackers to protect their bicycles. Many of these are designed for car tracking, but are so small that they can also be discreetly placed somewhere on your bike. For example, in a saddle bag, under the seat or on the frame hidden underneath a water bottle or attached to the pump.

An experienced bike thief may spot a GPS bike tracker right away, but many won’t. If your bike goes missing, you can instantly check in on its location with one of these handy gadgets. You can see its location in real time using an app, or through email or SMS notifications sent to your phone. In an emergency, a tracker might be the only thing that gives you a clue to your stolen bike’s location, even if the device has been discarded mid-way through moving the bike to a new location.

Last but not least, it's a good idea to register your bike somewhere like bikeregister.com (one of the leading bike registration sites for UK bikes, and it’s free to use) just in case it is stolen. Bike security measures like these are used by all UK police forces and provide access to a  registration database when a bike goes missing or suddenly turns up. It enables your bike to be identified quickly, and it can even act as a deterrent to would-be thieves.