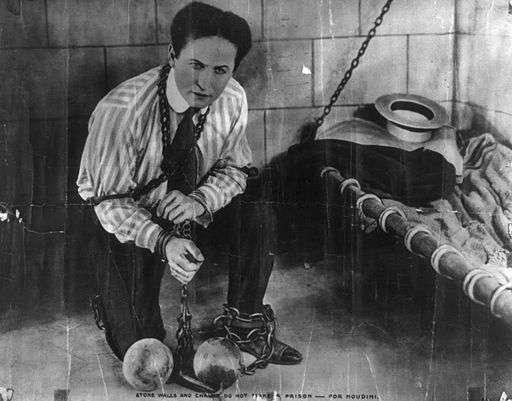 When the American National Archive declassified 750,000 wartime documents in 2008, a number of prominent celebrities and public figures were outed as former spies. The documentation, previously classified by the Office of Strategic Services, Americas intelligence office during both World Wars and forerunner to the C.I.A, revealed that many of America and Europes most prominent names had conducted covert operations around the world. Heres a selection of the most surprising.

Being a fantastic escape artist would probably be a good skill for a spy to have, but Houdini himself? That would be too obvious, surely. Apparently not though, as Houdini spied for both the Americans and the British to gather intelligence on Russian anarchists, and his means of intelligence gathering were utterly audacious. Houdini would travel the world, inviting local police forces to lock him up so that he could wow them with his escape artistry. Little did they know that he was also stealing valuable documents on other prisoners when they werent looking.

My disguise would be my own reputation as a bit of an idiot admitted the flamboyant playwright Noel Coward when talking about his past as an allied spy. Already a successful theatre impresario by the time World War II broke out, he abandoned his theatrical writing and moved to the States to operate a propaganda office. While there, British intelligence services put his celebrity to use by sending him to infiltrate Americas high society and political elite. His formidable memory and reputation as a vapid playboy made him the perfect spy - almost nobody suspected a thing - apart from Hitler, who wanted him executed.

Before he wrote his childrens classics, Roald Dahl was a fighter pilot for the R.A.F. Injured in a plane crash in 1940, the charming Briton was transferred to a desk job at the British Embassy in Washington D.C, where he worked his way up to a James Bond-esque role of seducing Americas high society ladies and keeping tabs on their husbands. He also used his people skills to promote British interests in America and secure support for the war effort back home.

An esteemed and legendary soldier in the Second Boer War, Baden-Powell famously held off an 8,000 man Boer army with just 500 troops of his own. He did it with cunning, creating fake landmines, tricking enemy fighters into thinking there were traps were there were none and recruiting local children to act as guards. As soon as he returned home, he used his fame and influence to set up the scout movement around the world.

Heres another literary figure who worked for the intelligence services, but Flemming differs from Dahl in that he used his experiences to bring to life the worlds best known spy, James Bond. Fleming worked mainly as a communications manager, conveying messages between different departments, but he also helped with conceiving spy schemes that would eventually help the Allies win the war. In one operation, he watched on as operatives from the British intelligence services cracked a Japanese safe and copied their code books. This operation inspired his first Bond book, Casino Royale.

British readers may struggle to put a face to this name, but Julia Child was like the American equivalent of Delia Smith or Fanny Craddock; a much loved TV chef and national treasure. However, Child was actually quite a senior spy with the OSS. One of her jobs was to create an underwater shark repellent that kept inquisitive snouts away from submerged explosives. The C.I.A remains somewhat secretive about the exact nature of Childs other work, suggesting it was a little more dangerous than she ever let on. Image Credit - Wiki Commons